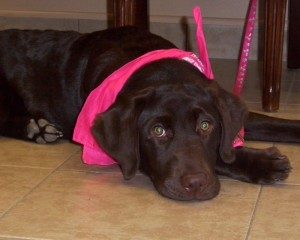 Questions on how to train a puppy are amongst the most common that I receive from clients, so I will give you the technique that I use to train my dogs. I will start by telling you that I am not a dog trainer or a behaviorist, so I will limit this article to training your new puppy not to defecate and urinate in the house.

To house-break a new pup I employ the use of crate training. When picking out a crate for training, it is important to keep the adult size of your dog in mind. If it’s too small, you will have to purchase another crate shortly in the future. So if you have a large breed dog make sure that your crate comes with a divider to make the crate smaller for use when he/she is a puppy. I prefer the crates with a plastic bottom that is removable for easy cleaning. Next would be to determine the location of the crate. Domestic dogs are social animals, and your puppy was probably just separated from its litter mates, so I prefer to keep the crate in a location in the house where the family tends to congregate, such as the den. The exact location, will be a matter of your own preference, but I’ve found that complete separation of the crate into another area of the house tends to result in stress to the puppy with some separation anxiety related behaviors developing in some dogs. This is a fine line, as your pup should learn over time to be without you, and know that the world isn’t coming to an end, so leaving him/her alone for short periods of time in the beginning is fine. The duration of time to be left alone can be lengthened over time.

The principle behind the use of a crate is not to punish the pup for bad behavior, but quite the opposite. The crate should be a comfortable place that is associated with pleasant things, such as feeding, treats, and rest. I will feed my dog next to the crate, and any time she goes into it, I will give her a treat. In the beginning, some pups are very destructive in the crate, so bedding may not be feasible. Unfortunately he/she may have to sleep on the plastic bottom. What I do in these cases is to place a few towels UNDER the bottom of the plastic so that there is some “give ” to it, and it is a little warmer than nothing at all. This stage is usually short, so as soon as the pup is not urinating or defecating in the crate, and doesn’t show the propensity to eat bedding, a bed can be put into the crate. The next item is the size of the crate. It should be big enough for the pup/adult dog to stand and turn around, but not so big so that the puppy will use one side of the crate to sleep and the other as a toilet. This is another principle behind its use, in that as pups age they will not want to soil where they sleep. In this we are trying to mimic a wild dog’s den.

Okay, so now we have set up our crate….on to training.

Above all, puppies need a steady routine of feeding, watering, sleeping, and walking and exercise with their families. The routine is particularly important in the beginning, with many dogs maintaining it into adulthood. As stated earlier, the crate is used for rest/sleeping. Puppies should sleep 16-18 hours a day early on. This time should be in the crate. Again, the theory being that they will not soil while in the crate. So, lets start with the morning. This may be quite early when you’re first starting. Get your pup out of the crate and GO DIRECTLY OUTSIDE FOR A WALK. Since your pup has been in the crate for several hours, he has to eliminate. You must walk him on a leash – letting him out in the yard doesn’t count. Always bring some treats with you. Each and every time he/she eliminates give lot’s of verbal praise and a treat. You must continue the walk until he/she urinates – sometimes multiple times – and the bladder is empty. Puppies will usually defecate 3-5 times a day, so he/she should defecate with each walk. Once you are done with the walk and your pup is “empty”, you can play outside for a while to get some exercise, or in the house. While you pup is loose in the house it is very important that he is not left unattended. This is so that if he starts to urinate or defecate, you can catch him in the act. If this happens, you should clap your hands loudly and yell in a stern voice “NO!”. This will usually startle them enough to stop, then take him outside to go. When he goes, give him praise and a treat as before. If you leave your puppy unattended and he eliminates without you present, you cannot punish him. Dragging him over to it and rubbing his nose in it, followed by yelling, DOES NOT WORK! So if you cannot stay with him, it is best to put him back in the crate for the time being. This schedule of walking and playing should happen 4-5 times a day at a minimum during the first few months of training.

Many people ask about weewee pads or paper training with an area fenced off. I do not find this to be effective, as it encourages the puppy to eliminate in the house. Once the owners try removing the weewee pads, many dogs will look for something similar to eliminate on, such as floor mats found in the kitchen or bathroom.

The other common question is what to do if the puppy is barking or crying a lot in the crate. In this instance, one needs to just use some common sense. If you just walked and fed your puppy, rest assured that all is okay. In this case, if he is barking to get out, I would recommend just ignoring him until he quiets down and goes to sleep. If you pay attention in this instance, or worse yet take him out ,it will just reinforce that behavior. If however, he’s been in the crate for a few hours, and wakes up and starts barking, I would take him out for a walk, feeding, etc.

This method has always worked well for me. You may need to modify it a bit in order to suit your lifestyle, but if you adhere to the basic principles, you should have your pup trained in no time at all.