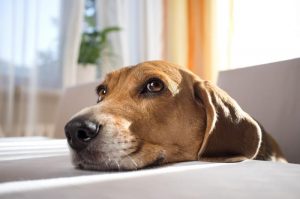 There are two general types of diabetes. Diabetes Mellitus ( the most common type, causing high blood sugar) and Diabetes Insipidus ( a very rare type, being caused by lack of production or responsiveness to a hormone called vasopressin). Both types of diabetes cause increased drinking and urinating. We will address Diabetes mellitus in this article, as it is the most common type diagnosed at the East Meadow Veterinary Center.

First, a very quick explanation of the key players, blood glucose (sugar) and insulin. In the normal individual carbohydrates (glucose) are absorbed from food into the body. Insulin is released by the pancreas, which then facilitates glucose uptake into the various body organs. In the case of diabetes there is either insufficient insulin or lack of response to insulin. This results in excess glucose in the blood (high blood sugar), BUT the body is actually deprived of the sugar it needs for normal function because the sugar is in the blood with no way of getting into target organs.

Diabetes mellitus is subdivided into types 1 and 2. In the case of type 1 diabetes insulin production by the pancreas is very low, whereas in type 2 insulin production is impaired and there is insulin resistance. Most diabetic dogs are type 1 diabetics. Most cats are usually type 2 initially, but by the time they are diagnosed they have progressed to requiring insulin treatments for regulation of the diabetes.

The typical signs of diabetes are 1) increased drinking 2) increased urinating 3) increased appetite and 4) weight loss (initially the individual may have been overweight but will lose weight as the body is deprived of its daily carbohydrate requirement.

As stated above, at the time of diagnosis most dogs and cats will require insulin injections for proper control of diabetes. Diet does play a role as well, and most clinicians will attempt a diet change that will optimize control of blood sugar and body condition. Daily exercise when possible is also helpful. In some of our feline patients at The East Meadow Veterinary Center, if we diagnose the condition early enough, we may be able to “cure” them with diet alone. We do not expect to cure, or even control most diabetics in the early stages of therapy. The goal is to gradually normalize blood sugar levels over several days or weeks. Unfortunately it is not usually possible to monitor blood sugar levels at home, as is done with human diabetics. Thus, there is more guesswork in finding the best dose of insulin for a given patient. We will start with a “starting dose”, and make gradual changes based on the perception of resolution of signs by our clients, weight gain, and performing “blood glucose curves” in the practice. A blood glucose curve is when the blood sugar is checked every 1 -2 hours in the practice after having a dose of insulin. This test will give us a rough idea of the proper dose, however, constant vigilance is required at home to monitor the patient. Regular re-check examinations are recommended until the patient is well controlled.